The 5-Minute Exercise that Can Make You a Fearless Speaker 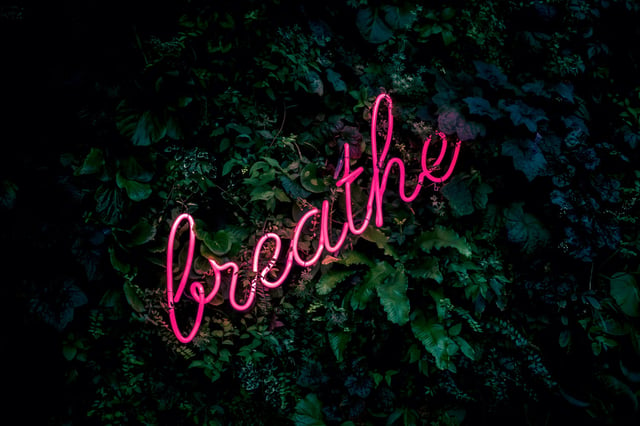 Do you know how to breathe productively for public speaking? This 5-minute exercise will slow your breath, calm you, and make you a more fearless speaker!

Here's a choice for you: a) Give a speech in front of 400 people, or b) Face an armed and hostile group of the same size as they attack your side's territory. Which situation would you find more dangerous?

Interestingly, if you have glossophobia or fear of public speaking, your mind doesn't differentiate between the two. Either event will kick-start the fight-or-flight response. And you'll be forced to deal with the emotional and physical turmoil that arises instantly.

How can you handle that level of mental chaos in the midst of a high-stakes presentation? Ideally—you don't. That is, the more you can educate and arm yourself to cope with such a crisis beforehand, the better outcome you'll achieve.

Incidentally, that applies to any stress-invoking situation, not only knowing how to overcome fear of public speaking.

And if you do find yourself in a deer-in-the-headlights situation when you're on stage? Once again, it's best to avoid it in the first place. Find out how in my free cheat sheet, "Oops! — 5 Ways to Recover from a Brain Freeze."

So how do you achieve such stress reduction and fearlessness? Or to put it another way: the ability to think, stay calm, and face the stressful situation with skill and resilience? I'll explain below, and offer a simple yet effective exercise that will take just 5 minutes out of your busy day. It's a great way for learning how to calm your nerves at times when you really need to do so.

The Miracle of Breath Control for Mindfulness

For the past 17 years, I've specialized in helping people at all levels control and even banish their fear of public speaking. I wrote a book on the subject, Fearless Speaking. (You can download a free chapter here.)  In fact, it's the textbook I use in The Genard Method's coaching program, since it includes 50 practical exercises and approaches for building one's speaking confidence and focus.

Among the most powerful tools for coping with stage fright that I use daily is healthy breathing. As I tell clients, nothing is faster or more reliable for reducing acute mental and emotional distress than calm, controlled, diaphragmatic breathing.

Call it a mindful way of using the breath—and if you want the name it was given thousands of years ago by yoga practitioners, it's Pranayama. That's a Sanskrit word that simply means "breath control." And that's the key: learning to control the breath, which is one of the most powerful tools of mindfulness.

The parasympathetic system is the opposite: it's a calming mode which allows you to rest, rejuvenate, and even reinvigorate yourself. By using Pranayama, i.e., controlling the breath, you can flip the switch to activate your parasympathetic response.[1]

But it gets even better! By employing a technique known as "resistance breathing," you can boost your calming response into . . . well, I was going to say high gear, but perhaps that should be "low" gear. I first learned about this technique in Richard P. Brown and Patricia L. Gerbarg's book, The Healing Power of the Breath. As the authors explain it: creating resistance to the breath creates a soothing effect, just as a cat's purr is caused by air moving past a partial obstruction in the cat's throat. The purring then induces greater relaxation.[2]

I was greatly interested in this effect because of my work coaching speakers to reduce their fearful response to public speaking. Because giving a speech is a form of performance, I began adapting Brown and Gerbarg's suggestion, along with a form of slowed respiration that's been around for centuries and that they refer to as "4-4-6-2."[3]

I wanted to take all of this into the performance realm by creating an exercise that would (1) counter the mental and physiological effect of speaking fear, (2) activate the calming nervous system, and (3) reduce physical tension prior to speaking. The 5-minute exercise is the one I give below, which I call "The Controlled Breathing Sequence."

Once again, the aim of this sequence is specifically to prepare you to cope with performance anxiety. You should become comfortable doing it on a daily or weekly basis, including times when you may not be facing a public speaking situation at all. In it, I've combined pranayamic breathing, a slowed breath count, resistance breathing (which I combine with some manipulation of the articulators), and a technique for "breathing into" your tension.

The more practiced you can become at activating your inner calm through The Controlled Breathing Sequence, the more easily you'll be able to call upon it in performance. You can start with 5 minutes, but feel free to get up to a 20-minute sequence if you want a longer and fully calming session. It truly is a hands-on, practical way of becoming a more fearless speaker. 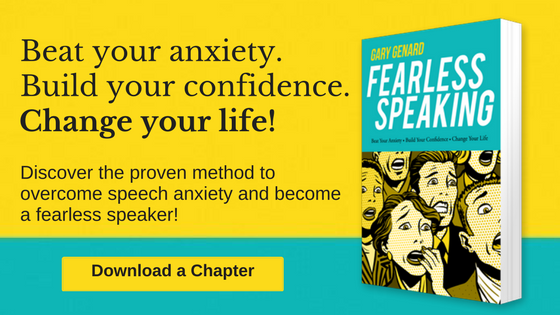