Be the Best Public Speaker You Can Be . . . Tell Stories!

Want to truly move people and reach their hearts and minds? Be the best public speaker you can be. Tell stories!

The truthful, inside story of almost any man’s life—if told
modestly and without offending egotism—is most entertaining.
It is almost sure-fire speech material.

Can I tell you a story? It’s all about how you can captivate audiences so they’re engaged, emotionally attuned to you, and eager to hear what you’re telling them.

Sound like an essential part of effective stage presence? It’s storytelling—and chances are you already know it’s a vital part of memorable public speaking. So how does it work . . . and how can you do it well?

Do you know how to reach people emotionally in storytelling? Find out what I'm talking about. Get my free e-Guide, "The One Habit that Will Make You a Better Speaker."

Telling a powerful story is an obvious winner if you have to make a case quickly. But stories aren’t only helpful when you’re under the speechwriting gun. Storytelling is one of the best tools for making people realize that what you’re saying matters in terms of their personal lives.

It’s all part of effective performance. And it's also important in knowing how to achieve presence and charisma. And it’s so ingrained in the human experience, that it isn’t limited to public speaking. Think of a parent (perhaps you) telling a child a story to teach them an important life lesson; or the creation stories that are so central to indigenous cultures; or Jesus speaking in parables. Or an actor relating a riveting story on stage or in a film.

Stories go straight to the heart as information delivered in other ways simply can’t replicate. When I was studying acting in London, I played guitar and sang at a restaurant on weekends. An elderly couple ate at this eatery often, and they seemed to me to enjoy the entertainment.

One night, the woman had the waiter hand me a note she’d just written. It read: “Music hurts and heals. You tell the story, and you make it happen.” Can you imagine how gratifying that felt?

And how true! The stories that these songs were telling found a way to this woman’s emotional center, in a way that I doubt a lecture ever would have done. As speakers, we nearly always focus—and sometimes obsess—on the information we're getting across. Fair enough. But there’s a world of difference between conveying important points starkly to an audience, and making that same information come to life in terms of why it matters to them. In the end, what any of us is most interested in is the story of our lives. It’s our job as speakers to make that clear to listeners once we learn how to captivate an audience.

Go for the Emotional Impact

Data by itself usually doesn’t carry the emotional power you need to move an audience. Telling them a compelling story that relates that data to human motives—and especially to their lives—that’s what delivers the emotional impact you should be looking for. (And anyway, you already know, don't you, why performance is more important than content?)

In other words, you need to connect to an audience’s emotional responses. As Carmine Gallo says, “If you want to stand out in a sea of mediocre presentations, you must take emotional charge of your audience.”[1] Want the scientific side to that argument? “The brain remembers the emotional components of an experience better than any other aspect.”[2]

Understand that every time you present, whatever your topic, you’re telling a story. You can call it a ‘narrative’ if you like. But you’re always, or should be, fashioning a framework so that people can a) make sense of your data, and b) understand it in terms of how it relates to their lives and others’ lives. You might be speaking of the most technical, scientific, or regulatory issue imaginable, but if your audience is as committed to it in their professional or personal lives as you are, well, then there’s emotion involved.

This is also where drama makes one of its entrances. Whatever your narrative is, it contains peaks and valleys in terms of pacing, intensity, immediacy, conflict, and other components. And when the people in the story you’re telling respond to this challenge, that’s inherently dramatic. The bare delivery of information, on the other hand (what most presentations consist of), is a pale imitation of this method of moving audiences.

And incidentally, when you tell your story, try using the present tense, which is immediately involving for listeners:

“So we’re sitting around the conference table. It’s 9:45 a.m., the client is coming at noon—and we STILL don’t have a design that we think is good enough. We don’t have anything that we think reflects our reputation and the quality of our work. And we’re getting very nervous about it. We’re all looking at each other, and everyone has a look of fear in their eyes.

Suddenly, I get an idea. It pops into my mind, and I immediately dismiss it. I think: ‘That’s too radical.’ Then I stop and think: ‘Wait a minute. What do we have to lose?’ So I look at everybody and say . . . “ 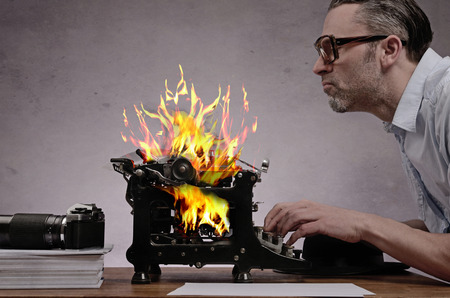 As you can see, because stories involve a narrative, they have a natural forward momentum and drive. If the story is inherently compelling and told well, this forward movement can seem unstoppable. And when you use the present tense, it seems like it’s all happening right now, not like something from the past. Listeners become intensely interested in the moment-by-moment unfurling of events. When is the last time you experienced a speaker achieving that kind of action in speaking? It probably happened if he or she was a good storyteller.

The idea of words as action, in fact, is a key element of storytelling and in using language effectively. It's just one more way that storytelling engages and even thrills audiences: young, old, and in-between.