Is Your Body Language Revealing More Than You Want It To?

Body language is powerful, and can reveal what you're thinking. Here are 10 ways you may be giving the game away in your response to others!

Don't look now—but someone may be reading your mind.

Actually, you should be looking, and paying attention to what you're seeing. Reading another person's nonverbal communication can give you important clues concerning what they're thinking and feeling. Of course, the same applies to your own movement and gestures.

In other words, you might be giving the game away if you're displaying a lack of confident body language. You may, for instance, be telegraphing, "What should I do with my hands?"

Discover how to move as a speaker while projecting complete confidence. Learn the nonverbal skills successful presenters use to command a stage. Add these essential techniques to your public speaking arsenal. Download my free cheat sheet, "6 Skills Building Exercises for Effective Body Language."

I'm not referring to what I've labeled elsewhere as the 7 deadly sins of nonverbal communication. The ones I'd like to talk about here are often due to unconscious behavior. Yet they're important, because people can be quite skilled in reading body language.

So, here are 10 ways you may be undermining the face you want to show the world. Some of this nonverbal behavior is minor (though still revealing). Some of it, however, can be a serious impedement not only to effective speaking skills, but to your credibility and your character as perceived by others.

10 Ways Your Body Language Gives the Game Away 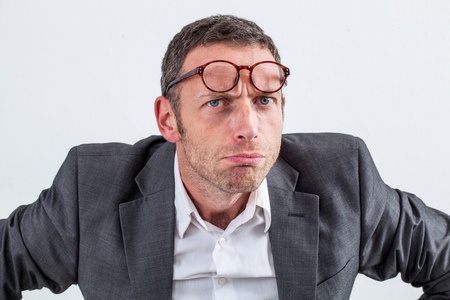 #1 Saying One Thing and Showing Another. A few months ago, my family and I were having lunch in a town we weren't familiar with. While my wife got the car, I asked directions of the hostess. She said, "Go out of the restaurant to the end of the block, then take a left," while she indicated "right". I asked her whether I should follow her words or her gesture. She laughed, realizing her goof. The reason? Probably just a momentary lack of focus. So, stay focused! And understand the extraordinary power of movement and gestures.

#2 The Giveaway Gesture. According to the dictionary, reveal means "to lay open to view; display; exhibit." Consider the consequences when you say something but you show the opposite. When Amanda Knox was asked by Diane Sawyer in a televised interview if she'd been present during her roommate's murder, she answered "No," then strongly nodded "Yes." What do you think any audience would make of this?

#3 The Disconnect. A recent article in one of our leading newspapers reported that financial analysts are paying particular attention to the voices of CEOs on earnings calls. If there seems to be a disconnect between, say, an executive presenting a rosy scenario while sounding uncertain or half-hearted, the analysts will trust the vocal rather than the verbal input. 'Nuff said.

#4 "Leaving" Listeners while You're Thinking. Have you noticed speakers who look up at the ceiling while formulating their argument? Are you thinking right now, "I do that"? It may be glancing off to the side or at the floor. But whenever a speaker's gaze leaves the audience, listeners have a right to think, "Hey, I'm over here!" A general rule: If you're not looking at your audience, nothing should be coming out of your mouth.

#5 The Deer-in-the-Headlights Look. Among my public speaking clients are political candidates. These speakers need to avoid a flummoxed look when asked a tough question, though that requirement applies to the rest of us as well. Your facial expression, especially the look in your eyes, can tell attentive listeners immediately what's going on in your head. So I advise this: Develop the physical skill of displaying a look of confidence. How? Say to yourself, "I can answer that." Because almost always, you can, even if you have to bridge to get there.

#6 Appearing to Be Somewhere Else Entirely. Do you notice when the person or audience you're talking to is completely uninterested in what you're saying? Many times, it's hard not to! A complete lack of affect, combined with a totally blank look, can be both obvious and insulting. Do you make a humane effort not to look like this in a conversation or listening to a question from the audience? Often, we're not kind as speakers or audiences. Let's learn how to be.

#7 Leaning Away. One of the worst pieces of advice around is: "Crossed arms = resistance." What if the person is shifting position for comfort? What if she's cold? Leaning away from someone (you can do it either sitting or standing) may not necessarily mean avoidance, either. But doing so in a pronounced and prolonged fashion, especially when combined with crossed arms, can spell a definite lack of engagement.

#8 Reluctance to Communicate. In my years teaching college-level Voice and Diction, and occasionally now in my speech coaching practice, I address the issue of a tight jaw. The point where your mandible (lower jaw) meets the maxilla (upper jaw) is furnished with muscles and tendons for smooth movement of that area. At the acting academy I attended in London, one of the teachers opined that a tight jaw equals a reluctance to communicate. Are you in this camp?

#9 Excessive Nodding. Here's a subtle 'tell' or physical action that reveals one's thinking: nodding while listening to a question. That probably sounds innocent enough. But it can reveal the feelings of the listener, especially when the nodding is excessive or becomes more vigorous during an overly long question. It says, "Yes, okay. Would you please shut up now so I can answer the question?" When I point this out to clients, the response is often, "OMG!"

#10 Staying Distant from Your Audience. Physical obstacles like a lectern or seating (as an actor, it pains me to say that theater seating is awkward) can make it difficult to connect with an audience. Worse is when we ourselves are the problem. You can, of course, be too tied to your notes or slides to miss your true goal of rapport. Equally bad is the 'perfectionizing' that requires reciting content precisely, instead of being present for your audience. These mindsets announce themselves by a stiff and distant delivery. Try to close that distance, fast.