PowerPoint? -- Learn this Skill if You Want to Succeed!

A few years ago, I conducted a sales training workshop at an annual sales meeting. The following day, I was fortunate to sit in on a talk entitled "The 7 Traits of a Successful Salesperson." It was a 90-minute presentation, which consisted of only seven PowerPoint slides, each with a single word on it.

What is this? I wondered: a 90-minute PowerPoint talk with just 7 words in total! (For more on how to deliver a dynamic and influential PP presentation, download our cheat sheet "5 Rules for Succeeding with PowerPoint.")

I'll explain the speaker's sleight-of-hand accomplishment in a moment. But first I'd like to discuss that going-against-the-grain aspect of using PowerPoint that so intrigued and amazed me. After all, PowerPoint is clearly a visual medium where text is not supposed to rule. So how did only words, and so few of them, possibly work?

Fortunately, Shakespeare has something to say about this.

When Macbeth is contemplating killing King Duncan, a guest in his castle, he argues against his own better judgment that murdering a king will be an isolated act:

If it were done when ’tis done, then ’twere well
It were done quickly. If the assassination
Could trammel up the consequence, and catch,
With his surcease, success; that but this blow
Might be the be-all and the end-all here,
But here, upon this bank and shoal of time,
We'd jump the life to come.

Just so: When it comes to PowerPoint, a speaker's story is the "be-all and end-all" as well: the start and finish of a presentation that needs that person to tell it. Yet how many speakers are oblivious to that fact? And how many cede their entire power to a simple presentation tool that never persuaded anyone?

PowerPoint has a reputation as a coma-inducing tool because it's used so poorly, and it's used poorly because speakers load it with information. Content, data points, bullet points: call it what you will, it's a deadly concoction that almost no audience member could respond positively to.

But presentations are oral performances, and a data-heavy tool will press the life out of them every time. The story you tell, however, is another matter. All human beings respond viscerally to stories. When your narrative is captivating—backed up if you will with powerful visuals, you will almost certainly succeed.

A Word to the Wise

The "7 Traits of a Successful Salesperson" speaker understood this. With only one word on a slide, there was nothing else for us to do but listen to the story he was spinning in the air.

"FOCUS"—that word would appear surrounded by a stylized background (which changed with each word). And he would tell us about focus in a salesperson. "DISCIPLINE"—and the magic would continue with the second part of his narrative.

And interspersed with these single words was full-time engagement for the audience: a volunteer, a group exercise, a game, or any other activity that would prove his point. We weren't deadened by content but were active, busy, pulled into the demonstration of these successful traits because he wouldn't have it any other way.

Are there topics that benefit more from images on PowerPoint than this approach? Of course. Do certain presentations require photos, drawings, schematics and the like? Certainly. But death-from-PowerPoint too often comes from bullet points. Edward R. Tufte's monograph "The Cognitive Style of PowerPoint" has Stalin on the cover since, after all, "there's no bullet list like Stalin's bullet list!"

Why make your audience surrender . . . when you can provide a few words to the wise instead?

Takeaways from this blog: 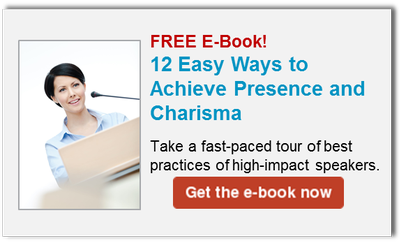