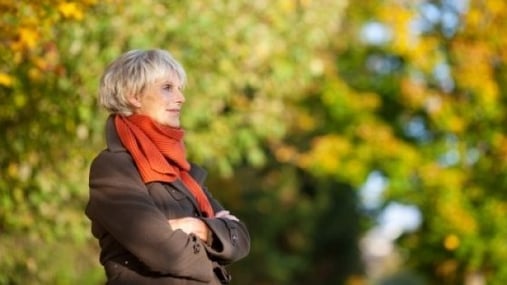 Are you overly nervous or self-conscious about speaking in public? Many of us are—and too often, we blame ourselves for the fear and anxiety that results.

To reduce nervousness and increase your focus, download my free cheat sheet, “How to Calm Your Nerves before Speaking.”

Fear is not rational, of course—it’s a visceral response that comes from the sense that you’re in danger. One of the reasons fear of public speaking, or glossophobia, is so difficult to overcome, in fact, is that it’s such an irrational process.

Of course, speaking in public is rarely a dangerous situation. Yet your mind may perceive it that way. The fact that you react so strongly and inappropriately just makes speech anxiety that much more difficult to deal with.

However seemingly intractable speaking fear may be, you can’t escape the need to restructure your thinking. Otherwise, your erroneous thought processes will keep you in a state of anxiety and unrealistic expectations. As if you didn’t have enough to worry about concerning the actual speaking situation, you bathe yourself in negative self-talk that diminishes your confidence while increasing your sense of helplessness.

So you need to change that negative self-talk into positive coping statements.

But that isn’t enough. If altering your thinking were sufficient, that’s all you’d need to do to develop overwhelming confidence. Over the past decade and a half of helping professionals deal with speech anxiety, I’ve come to realize that dealing with two more areas of speech performance are needed. The three essential areas to work in to eliminate fear of public speaking are these:

In this blog, I’ll discuss the first of these three critical areas. The two blogs to follow will deal with the second and third areas.

In one sense, you create your own fearful response to public speaking. If you substitute your fears for reality, you’re creating a frame of mind that’s much harsher than the actual speaking situation.

To break out of the cycle of a) undervaluing your worth as a speaker, b) overestimating the negative response of your audience, and c) believing that listeners are judging you instead of the value of your message, you have to change your unhealthy thoughts into constructive thinking.

This process of re-routing negative thinking into productive channels is called "cognitive restructuring." For you as a speaker, it simply means changing from a negative mindset into positive territory in terms of public speaking.

Tools for Changing Your Thinking

How can you do so? Here are three ways to change your negative cognition:

Overcome Worst-Case Thinking: Worst-case thinking means imagining that a truly awful outcome is going to occur despite little or no evidence. One way you can overcome such thinking is to create a chart that lists in one column all your "worst cases." In another column, write down what is most likely to occur. "I'll forget everything I'm supposed to say" will realistically become "I'll share this valuable information I have on this topic" or something similar. Voila! You'll help train your thoughts into a constructive rather than self-limiting path.

Develop Positive Coping Statements: Familiarize yourself with the negative self-talk you typically create and listen to. For each such counterproductive statement, compose a helpful mantra instead. For instance, “I’m just not a good public speaker” can easily become, “I can learn the skills of effective public speaking.”

Channel Your Thinking: Practice the valuable skill of downsizing a negative outlook by first creating a less negative viewpoint, then moving into positive thinking. You might think of this as a learning-to-walk-before-you-can-run approach. If you’re likely to say to yourself, “Audiences see I’m nervous,” you can change that thought first to “Audiences can’t see I’m nervous,” and finally to “Audiences see I’m confident.”

By working in the area of cognitive restructuring, you’ll be changing your role from that of your own worst enemy to your own best friend as a speaker. Not a bad person to have in your corner! 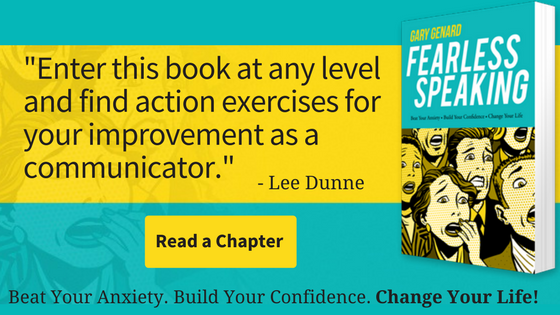