Gettysburg Address: America's Greatest Speech and Why It Endures 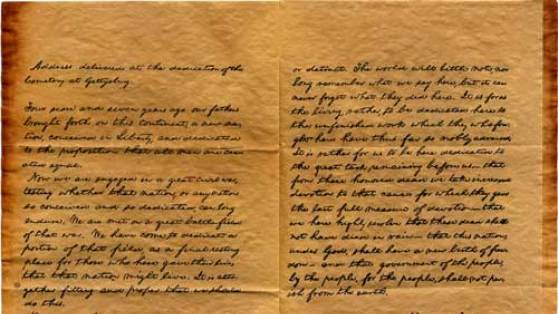 America will soon celebrate the 150th anniversary of the Gettysburg Address, often called the greatest speech in our history. Did President Abraham Lincoln realize he was about to achieve immortality as a speaker that day in a small town in Pennsylvania? Perhaps not. After all, he had prepared a remarkably brief 270-word speech for the afternoon of November 19, 1863.

But it was indeed a magnificent speech, despite the mere two-and-a-half minutes it took to speak it. Interestingly, the president didn't have top billing that day. The dedication of the Union cemetery following the Battle of Gettysburg four months earlier was to feature Massachusetts politician and famed orator Edward Everett.

As was typical of the era, Everett wrote a two-hour oration and delivered it from memory. Yet he was moved to write to Lincoln the next day, "I should be glad if I could flatter myself that I came as near to the central idea of the occasion, in two hours, as you did in two minutes."

Though brief, Lincoln's "dedicatory remarks" were prepared with care. Contrary to rumor, he didn't write his speech on the back of an envelope in the train on the way to Gettysburg. Here, then, are three reasons Lincoln's powerful evocation of the solemnity of that day in Pennsylvania has endured:

Conciseness. Lincoln lays out in just 10 sentences the momentous elements of the day and its significance. They are: the central founding principal of the nation; the solemn occasion that brought everyone to Gettysburg; and the bittersweet burden the living have to carry on the devotion of the Union soldiers who died in that place to preserve liberty.

Contrast this with the opening of Everett's featured oration. As befits a leading speechmaker of his era, Everett's lines are soaring and beautiful and exemplify the oratorial standards of the day. But compared to Lincoln's spare and evocative style, Everett's efforts are flabby, verbose, and wholly lacking in impact. Here is his opening:

Standing beneath this serene sky, overlooking these broad fields now reposing from the labors of the waning year, the mighty Alleghenies dimly towering before us, the graves of our brethren beneath our feet, it is with hesitation that I raise my poor voice to break the eloquent silence of God and Nature. But the duty to which you have called me must be performed; grant me, I pray you, your indulgence and your sympathy.

Simplicity. Compare the rhetorical style of the two speakers, and the difference between Lincoln's verbal power and Everett's long-windedness is immediately apparent. Here are descriptions of Everett's: "obsequies of the citizens who fell in battle," "bones carefully gathered from the funeral pyre," "votive offerings of friends and relatives," "the last tributes of surviving affection," "lamentations for the beloved," "shaded with trees sacred to Minerva." These examples are all from only the second paragraph of Everett's speech.

Now Lincoln: "new nation," "all men are created equal," "met on a battlefield," "gave their lives that that nation might live," "fitting and proper that we should do this," "dedicated to the unfinished work," "increased devotion to that cause," "a new birth of freedom," "of the people, by the people, for the people." Lincoln's one rhetorical flourish, "four score and seven years ago" (for 87 years) is forgivable given the simplicity of what followed.

Eloquence. No audience was ever impressed by the superior learning or verbal pyrotechnics of a speaker. Eloquence arises from simple, concrete words filled with meaning and used to evoke emotions listeners know intimately. Listen or read Winston Churchill's speeches, much closer to our own time, and you'll understand how this is achieved. Edward Everett's references to the funeral pyres, mournful processions and orations of ancient Greece simply couldn't compete with Abraham Lincoln's reminder of the dead Union soldiers' "last full measure of devotion."

It's said that some listeners that day were shocked to realize Lincoln's speech was over almost before it began. If so, they could reflect that they'd heard a few simple, concise, and eloquent remarks paying tribute to exceptional people on an important occasion. Exactly, that is, what great speeches are supposed to achieve.

Four score and seven years ago our fathers brought forth on this continent, a new nation, conceived in Liberty, and dedicated to the proposition that all men are created equal.

Now we are engaged in a great civil war, testing whether that nation, or any nation so conceived and so dedicated, can long endure. We are met on a great battle-field of that war. We have come to dedicate a portion of that field, as a final resting place for those who here gave their lives that that nation might live. It is altogether fitting and proper that we should do this.

But, in a larger sense, we can not dedicate -- we can not consecrate -- we can not hallow, this ground. The brave men, living and dead, who struggled here, have consecrated it, far above our poor power to add or detract. The world will little note, nor long remember what we say here, but it can never forget what they did here. It is for us the living, rather, to be dedicated here to the unfinished work which they who have fought here have thus far so nobly advanced. It is rather for us to be here dedicated to the great task remaining before us -- that from these honored dead we take increased devotion to that cause for which they gave the last full measure of devotion -- that we here highly resolve that these dead shall not have died in vain -- that this nation, under God, shall have a new birth of freedom -- and that government of the people, by the people, for the people, shall not perish from the earth.

Lincoln's speech: Collected Works of Abraham Lincoln, edited by Roy P. Basler. The text above is from the so-called "Bliss Copy," one of several versions which Lincoln wrote, and believed to be the final version. http://www.abrahamlincolnonline.org/speeches/gettysburg.htm