For Powerful Speaking, Learn How to Bring Your Ideas to Life

Want to add to your effectiveness as a speaker? Then learn how to bring ideas and emotions to life. Content rarely moves audiences unless speakers can turn an audience on emotionally or make their ideas burn in the minds of listeners.

To achieve maximum influence and inspire your listeners, download my free eBook, "12 Easy Ways to Achieve Presence and Charisma."

Let’s look at how it’s done.

Being a truly effective speaker starts with breathing. Controlling your breath is critical to countering speech fright, for one thing, since pronounced nervousness almost always disrupts the breathing rhythm. To conquer fear of public speaking, here's true "inspiration." And if your breathing is disrupted, the flow of ideas and emotional impact of what you’re saying will be broken. That's not effective speaking!

But even if you don’t need to learn how to eliminate speech anxiety, you need to be in control not only of what you’re saying, but how you say it. To deliver your message with pacing and power, you must support the meaning of the words you're saying. Specifically, this means bringing the ends of phrases clearly to your listeners.

The Key to Being a Dynamic Speaker

Why? Because unlike in written communication, you don’t speak sentences; you speak ideas and emotions. So you have to sustain the produced sound until you reach the end of the idea you’re trying to express. In fact, you can get into trouble if you think in terms of sentences at all (as they’re written in your notes) rather than the idea you’re trying to convey. For example, an idea may take three sentences to be expressed; though another sentence may contain three different ideas, and so on.

Now for the other part of the equation:

In English, the most important word usually comes at the END of the phrase.

That’s the payoff for listeners—and that’s why you need to speak the end of that phrase emphatically, with full breath support. For example, take Shakespeare’s most famous line: “To be, or not to be: that is the QUESTION.” That “question” is the whole point of Hamlet delivering this soliloquy. And it comes at the end of that first phrase he speaks.

Imagine an actor who loses his breath in the middle of this all-important pronouncement! The audience member’s response might be something like this:

Audience Member: Huh? What was that? George, did you hear what he said?

Something would be rotten in Denmark indeed in such a performance!

Supporting the Idea in Speeches and Presentations

What does all of this have to do with the presentation or speech you’ll be giving? Let’s look at some current-day examples from the worlds of business, politics, and sports to see why supporting an idea vocally is a must. The italics below are mine, added to point out how the important ideas in these quotes occur at the ends of phrases:

You can see how the force of an idea is amplified when it occurs at the end of a phrase, so that it resonates in listeners’ minds in the second or two before the next phrase is spoken. Obviously, if an audience is to receive the full force and impact of what you’re saying, your spoken words must be supported with adequate breath.

Absolutely the best examples of this effect in action are the speeches delivered by Shakespeare’s characters. In a future article, I’ll show some of these marvelous examples of the spoken word in action.

For now, remember that bringing your ideas and emotions to life involves supporting your words through adequate breath. That way, your critically important message will have the vocal "punch" it needs to hit listeners where they live. 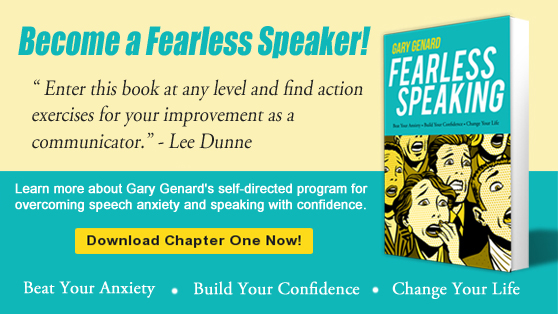