4 Dangerous Myths that Will Hurt Your Public Speaking 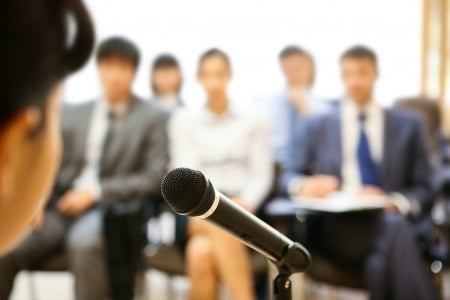 Ever wonder where that saying came from about being our own worst enemy? At least one place you'll find it is in this elegant turn of phrase:

"Very often we are our own worst enemy as we foolishly build stumbling blocks on the path that leads to success and happiness."

If there's a truer sentiment regarding self-consciousness and nervousness about public speaking, I don't know of it. (To bring yourself down to earth and speak with greater focus and presence, download our cheat sheet, "How to Calm Your Nerves Before Speaking.")

Here are 4 common myths about public speaking that, like "building our own stumbling blocks," keep us from realizing our full potential as speakers. Equally bad, these myths may make us avoid speaking in public, and so keep audiences from hearing what we have to say:

Myth #1: Public speaking is dangerous. This is a particularly widespread and damaging myth. Not only are audience members never your enemy; but even a failed presentation will rarely result in your being fired, demoted, or even seriously compromised in your job. Speaking isn’t a perilous adventure on the order of any of the things that should really scare you, no matter how hard you try to make it so. Remember: a diamond is formed by pressure, and only afterwards is it polished. If you find speaking in public challenging, that means it’s a golden opportunity for you to grow.

Myth #2: Nervousness will make you perform poorly. Where’s the link between feeling anxious and giving a bad performance? There isn’t one, at least that I’ve been able to find. Although nervousness may certainly make you feel ill at ease, it's such an internal state that it doesn't easily transfer to your skill set. Stories are common from both business and theater where someone will speak then say to a colleague, “I know I was horrible! I was so nervous.” Usually the other person will respond: “Really? I didn’t see it.”

Myth #3: Everyone will see how nervous you are.  . . . And once they do, the entire audience will realize that you can’t do your job! This is nonsense. Most nervousness isn’t visible to others because, as I mentioned above, it’s internal. And if people do see you’re nervous, they’ll most likely have the normal reaction, which is to sympathize with you.  Audience members feel good when you’re succeeding and embarrassed when you’re failing. So they're actually on your side and want you to do well.

Myth #4: You have to be an excellent speaker. Who says so? Are you employed as a motivational speaker, or in some other profession? The belief that you have to be “excellent” is often a hindrance to effective public speaking because it confuses polish with genuine communication. When you speak to people (who almost always want to be in the audience), your job is to connect with them and give them something of value. It isn't to be slick, charismatic, or a stand-up comic. Instead of "excellence," concern yourself with being honest and trustworthy. And if you happen to give a lackluster presentation, so what? Failure can be the best of teachers, since you’ll want to do that much better the next time.

So leave the myths for the ancient Greeks and Romans. Be a public speaking hero instead.

Takeaways from this blog: